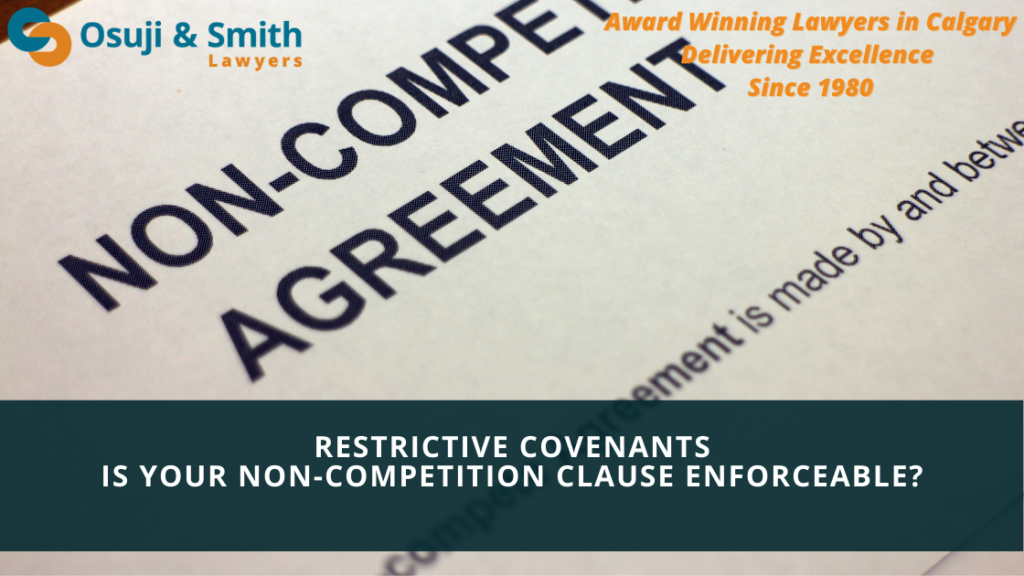 Restrictive Covenants, also known as restraints against trade, are restrictions imposed on the way that the employee will do business in the future.  Non-Competition / Non-Solicitation clauses or agreements are examples of these restrictive covenants.  In the past, Canadian courts have taken the view that restrictive covenants found in agreements are presumptively unenforceable, unless the company seeking to enforce such restriction can demonstrate that such restriction is reasonable in the circumstances.

The reasonableness of the restriction is examined based on: a) the geographic coverage, b) the duration, and c) the extent of activity sought to be restrained. The language used in the restrictive covenants must also be unambiguous and ascertainable.  If the employer cannot establish that the restraint is reasonable, and that it is not injurious to the public, then it will not be enforced.

The Supreme Court of Canada in Shafron v KRG Insurance Brokers (Western) Inc, 2009 SCC 6 [Shafron], ruled that a restrictive covenant that does not meet the above requirements would be void and unenforceable.  Further, the Court made it clear that the courts would not read down such clauses as it may unjustly allow the employers to write an overly wide, unreasonable provision and let their employees litigate the matter.  This would not be fair to employees who generally have limited resources in comparison to their employers.

Despite the decision of Shafron, the Alberta Court of Appeal in the recent case of City Wide Towing and Recovery Service Ltd v Poole, 2020 ABCA 305 [City Wide], applied the blue pencil severance to reduce the geographical scope of the non-competition restrictive covenant set out in the Non-Competition Agreement.  How would this decision affect the enforcement of restrictive covenants in an employment setting going forward?

In City Wide, Mr. Poole operated a vehicle towing business, Capital Towing, in and around Edmonton.  On September 29, 2017, Poole entered into an asset purchase agreement with the respondent, City Wide Towing and Recovery Service Ltd.  City Wide purchased the business of Capital Towing on a condition that Mr. Poole would remain employed with City Wide for two years, and in addition to the asset purchase agreement, the parties entered into an employment agreement and a non-competition agreement.  The non-competition agreement contained a non-competition clause restraining Mr. Poole from competing with City Wide in Alberta, British Columbia, Saskatchewan, and other locations within Canada where City Wide is operating during the restriction period of 5 years.

On the surface, the decision in City Wide may appear to be contrary to the historical approach taken by Canadian courts in the past where the courts indicated that they would not come to the assistance of an employer to draft an overly broad restrictive covenant and pressure former employees with the terror and expense of litigation.  However, when looking in more detail, it reveals the circumstances which led the Court to decide that it was reasonable to apply the blue pencil severance.

In this case, there did not exist the typical imbalance in the relationship between employer and employee.  The relationship between the parties was more than a mere employment relationship and involved a sale of business between two competent parties.  Also, there was a legitimate business interest to be protected here, and it was reasonable that Mr. Poole would be restrained from competing with City Wide in Alberta where Capital Towing carried on business.  It would have been detrimental to City Wide if the entirety of the non-competition clause was rendered void and unenforceable due to its broad geographical restriction.

In summary, the relationship presented in City Wide resembled more of a commercial contract for a sale of business, rather than an employment contract.  Therefore, the ruling in Shafron still governs the enforceability of a restrictive covenant in an employment relationship, and the courts will likely maintain their earlier position that a clause that does not meet the reasonableness requirements would be considered void and unenforceable and they would not read down such clauses.  As such, this is unlikely to affect future litigations arising from a typical employment relationship.

Please contact Osuji & Smith Lawyers for any questions you might have regarding the enforceability of your restrictive covenants.