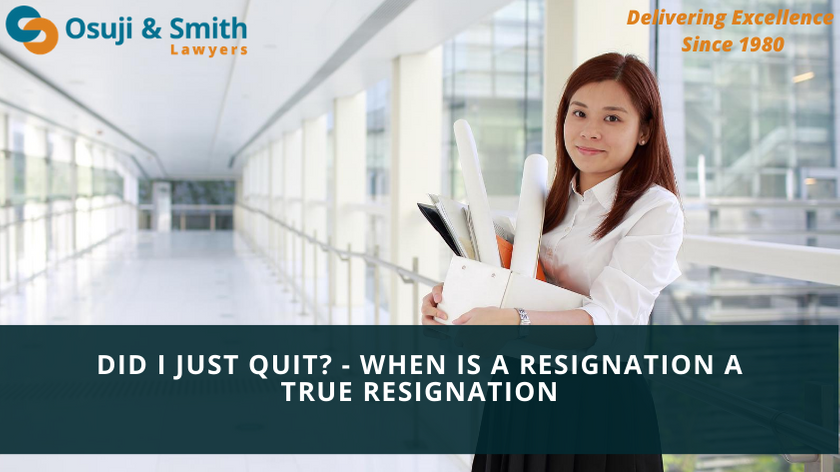 Imagine it’s a busy night at the restaurant you work in and so far, you’ve been bustling just to keep up with the rush of orders. Unfortunately, things start to get out of hand when an incident occurs with a patron, causing you to be frustrated to the point where you can no longer hold back. You see your boss walking towards you, and in the heat of the moment, you say to her, “I quit!” and walk to the backroom to grab your keys to leave. On the car ride home, having had time to let the evening’s events sink in, you think to yourself, did I really just quit?

Such situations occur more often than you may think where employees, in frustration, utter the words, ‘I quit,’ to their employer as they walk off the job. But then the question becomes, should the employer, when this resignation is voiced in this manner, take it seriously at its face value?

The Ontario Superior Court in Upcott v Savaria Concord Lifts Inc. (2009, OJ No 3305) answered this question when the plaintiff, Mr. Upcott, did just that. Mr. Upcott, a production manager for eight years at Concord Elevators, was involved in an altercation with a co-worker in the workplace, leaving the co-worker to file a complaint against him with the human resources manager. When the HR manager tried questioning him about the altercation, Mr. Upcott, in anger and not wanting to discuss the issue further, told him, “I’m done,” and threw his keys on the manager’s desk as he stormed out of the workplace. While exiting, Mr. Upcott also told other employees he passed by that he was “done.”

On his way home, Mr. Upcott called and left a message for Concord’s vice president of operations, asking for a time when he could retrieve the rest of his belongings. Concord, having listened to his message and considered his behavior from that morning, took this as a sign of resignation and quickly notified their acceptance of it through a phone call and a letter drafted to Mr. Upcott. Mr. Upcott disputed this resignation, stating that he had retracted it (although there was no clear evidence of this), and brought an action against Concord for wrongful dismissal.

After examining the events, the Court ruled that Mr. Upcott had not resigned and that Concord had wrongfully dismissed him. The court stated that for a resignation to be valid, it had to be ‘clear and unequivocal’, meaning that a reasonable person, when observing the situation, would conclude that the employee intended to resign, whether it was through the employee’s explicit or implied conduct. Additionally, the Court stated that when an emotionally upset and angry employee exclaims “I quit,” it is on the employer to properly question this declaration before accepting it at its face value.

The Court was convinced that Mr. Upcott wished to leave his employment when he said, “I’m done,” to the HR manager and other employees when he was leaving, as well as when he made attempts to retrieve the rest of his belongings from the workplace. However, the Court stated that a reasonable person, looking at the matter objectively, would have concluded that Mr. Upcott was in a foul mood when he quit and would have, very quickly after leaving the office, retracted his resignation. Concord, as the Court reasoned, should have recognized this ‘fit of anger’ and reasonably understood that Mr. Upcott had no true intention to resign, and would likely have come back to work ‘with his tail between his legs.’ Furthermore, the Court found that Concord did not reasonably deliberate on the words and actions of Mr. Upcott as they should have, nor did they wait for him to cool down from his fit of anger to question him about his true intentions. As a result, Mr. Upcott was awarded damages against Concord for wrongful dismissal.

Returning to the example given earlier, the circumstances surrounding the moment when an employee exclaims that they quit, as well as the actions taken by the employer thereafter, can impact whether the resignation is deemed valid. You may ask yourself, if in a similar position, would a reasonable person, having considered the context in which the declaration was made, have understood that I was intending to resign? Did my employer follow up with me after I had some time to cool off to see if this was indeed my intention? If the answer to both these questions is no, it is possible you did not tender a valid resignation to your employer. A resignation has to be made in a clear and unequivocal manner, where a reasonable person would understand that you intended to cut ties with your employer.

If you are considering resigning from your employment, it is recommended that you first review your employment contract to determine the terms surrounding a resignation, along with any other terms that could be triggered upon your resignation (i.e. a non-competition clause). Generally, most employment contracts contain a termination clause that specifies the manner in which resignation is to be made and the amount of notice the employee is to give to their employer. If the contract does not contain such clause, the Alberta Employment Standards Code, RSA 2000, c E-9, mandates that an employee wishing to resign from their employment must give one-week written notice to their employer if they have been working for their employer for more than 90 days but less than two years. If it has been two or more years, the employee must give their employer two-weeks written notice.

At Osuji & Smith Lawyers, we can help you navigate these employment law issues and discuss what rights and options you have in your particular matter. As one of Calgary’s top-rated employment lawyers, we are well-versed in handling employment law matters and using our experience and skills to maximize benefits for our clients.

If you would like to book a consultation with us, please call us at 403-283-8018 or complete our online intake form.