Consideration and Enforceability of Post-Contractual Obligations 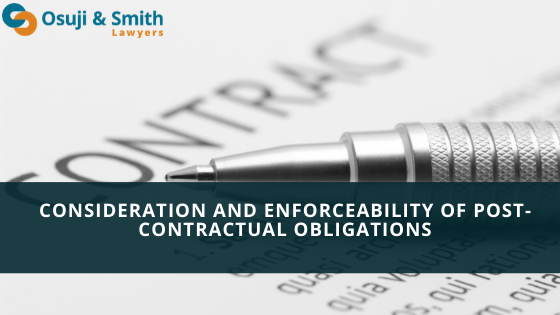 Under common law, a contract requires offer, acceptance, and consideration.

The element, “consideration” is a value that has been bargained for between the parties to a contract. The consideration in this sense does not have to be a monetary benefit. It may “consist either in some right, interest, profit, or benefit accruing to the one party, or some forbearance, detriment, loss or responsibility, given, suffered, or undertaken by the other…” (Currie v Misa, (1875-76) LR 1 App Cas 554).

Generally, the law requires fresh consideration for amendments to existing contracts to have that amendment enforceable. In other words, if there was no exchange of new consideration in amending a pre-existing contract, the amended contract would not be enforceable. For example, in Stilk v Myrick, [1809] EWHC KB J58, 170 ER 1168 [Stilk], Lord Ellenborough decided that the amended contract that required more payment for the same service under the original contract (i.e. pre-existing contractual obligation) was not fresh consideration. Consequently, in this case, the employer did not have to pay more wages to the employees than the original contract, despite its earlier post-contractual promise to pay more.

However, the strict approach in Stilk has been modified and softened over time. In England, the Court of Appeal in Williams v Roffey Bros & Nicholls (Contractors) Ltd.,  [1991] 1 QB 1 ruled that the general contractor should make extra payment (post-contractual promise) to its subcontractor, which was promised for the same service (pre-existing contractual obligation) to avoid delay in construction. The Court ruled that the consideration requirement was satisfied as the general contractor “obtained in practice a benefit, or obviated a disbenefit from giving the promise”.

In Greater Fredericton Airport Authority Inc v Nav Canada, 2008 NBCA 28, Robertson J.A. stated that “a post-contractual modification, unsupported by consideration, may be enforceable so long as it is established that the variation was not procured under economic duress”. Among several reasons, the Court emphasized that the doctrine of consideration is tied to the reality and should be flexible to reflect the current commercial reality: The reality that “existing contracts are frequently varied and modified by tacit agreement in order to respond to contingencies not anticipated or identified at the time the initial contract was negotiated”.

In Globex Foreign Exchange Corporation v Kelcher, 2011 ABCA 240 [Globex], Alberta Court of Appeal considered the doctrine of consideration in the context of employment. The point of contention was whether the continued employment of the employees was consideration for the new agreement (restrictive covenant).

In this case, Hunt J.A. for the majority ruled that “continued employment alone does not provide consideration for a new covenant extracted from an employee during the term of employment because the employer is already required to continue the employment until there are grounds for dismissal or reasonable notice of termination is given”.

However, Slatter J.A. disagreed and stated:

[129]… The employee may seek a raise in pay, or promotion, or transfer, or a different work schedule, or other changes. The employer may feel the need to change the arrangement to respond to competitive pressures or changing business conditions. It is unrealistic to establish a rule of law that prevents the parties to a long-term employment relationship from restating and reducing to writing, from time to time, the terms of employment. Both parties rely on the enforceability of the terms of employment, and should not have their expectations disappointed by an artificial rule of law which makes their covenants unenforceable after they have been relied on for years.

[135] … In applying the law of consideration, the courts should refrain, if possible, from relieving the parties of covenants freely entered into, absent some overriding public policy consideration…

[176]… I am persuaded that the legitimate expectations of the parties in the case of a modification to a going transaction should be protected. … It is but an incremental evolution of the law to say that in these cases, in the absence of duress, unconscionability or other proper policy considerations, such modifications should be enforceable. …

In summary, the doctrine of consideration has been evolving overtime, and still is. The court endeavours to find a fair outcome between the parties in light of their commercial reality.