The decision in these cases serves as a reminder for any organization that processes personal information to protect that information from unauthorized disclosure.

A few months after their relationship ended, the Defendant hacked into the Plaintiff’s personal Facebook account, changed her password, and posted one of the boudoir photos without her consent. He also hacked her personal email account and forwarded the boudoir photos to her boyfriend, along with a sexually suggestive email.

As a result of these actions, the Defendant was charged with Mischief and pled guilty in the Provincial Court of Alberta.

Later, while applying for employment, the Plaintiff discovered her name was linked online to a pornographic website, and her photos had been posted online using a Tumblr account. Various facts pointed to the Defendant as the person who posted these photos online.

After reviewing all the facts of this case, Judge R. Paul Belzil found the case against the Defendant proven on circumstantial evidence, and granted a summary judgment for Breach of Confidence and the Public Disclosure of Private Facts. He awarded damages totalling 0,000.

In Canada, the tort of Public Disclosure of Private Facts was first introduced in Ontario in 2012. Earlier this year, it was recognized by a court in Nova Scotia in a case of divorce and custody dispute. Alberta is the first western Canadian province to recognize it.

Because of these photos being posted publicly, the Plaintiff suffered psychologically and emotionally, including nervous shock, sleep disturbances, post-traumatic stress disorder, and public embarrassment and humiliation. So she pursued an action against the Defendant and sought damages for Public Disclosure of Private Facts.

The Court found that the Plaintiff established Public Disclosure of Private Facts, and that situations involving sexually based wrongdoing result in significant and long-lasting harm to the victim because of their attack on privacy and dignity, and therefore, warrant higher damages.

How to Establish Public Disclosure of Private Facts

If the Defendant publicized an aspect of the Plaintiff’s private life without the Plaintiff’s consent, and that publication is highly offensive and of no legitimate concern to the public, Public Disclosure of Private Facts can be established.

Why is the Public Disclosure of Private Facts Significant in Alberta?

Alberta’s Protecting Victims of Non-Consensual Distribution of Intimate Images Act came into effect in 2017, but it didn’t apply to situations where the distribution occurred before 2017, or where the private information that was disclosed was something other than intimate images.

The application of Public Disclosure of Private Facts in Alberta is not limited to sexual images. The Court recognized privacy interests in financial, health, and relationship information as well. This makes these recent decisions significant for any organization in Alberta that processes personal information.

This new tort enables a victim whose private information has been publicly disclosed without their consent to seek damages for that disclosure. It also relieves the Plaintiff of a high burden of proof, as is required by other torts. Damages are presumed when private facts are disclosed without consent.

The lawyers of Osuji & Smith in Calgary, Alberta are prepared to listen with compassion. We’ll review your case and give you options tailored to your needs. We can help you establish the Public Disclosure of Private Facts. 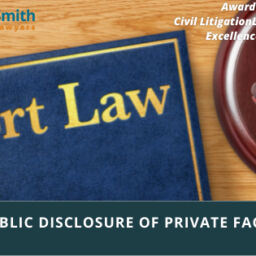 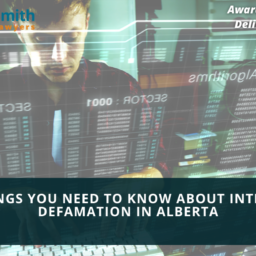 E-torts: Defamation on the Internet – 8 Things You Need to Know About Internet Defamation in Alberta People say awful…

PUBLIC DISCLOSURE OF PRIVATE FACTS We all know becoming “Facebook official” is a pivotal moment for new couples. Publicly changing…