The Supreme Court of Canada (SCC) recently released a decision that clarifies specific aspects of the law regarding employment termination, wrongful dismissal, and employee entitlement. This October 2020 decision was in the case of Matthews v. Ocean Nutrition Canada Ltd., 2020 SCC 26.

Matthews is a chemist who was an employee (and most recently Vice President) of Ocean Nutrition Canada (ONC) from 1997 to 2011. ONC manufactured omega 3 fish oil for commercial sale.

In 2007, ONC began to change Matthews duties and entered into a long-term incentive plan (LTIP) agreement with Matthews. Under the LTIP, upon the sale or public offering of ONC in excess of 0 million (a situation referred to as a “Realization Event”), 2% of the company’s value would be distributed among the executives who were a part of the LTIP.

There were a few sections of the LTIP that came into question during the case.

Simply stated, the wording of the Agreement seems intended to free ONC from any obligation to provide any former employee a share of the LTIP regardless of when or how the employee left the company. Additionally, it aims to exclude the value of the LTIP from any resignation, severance or termination entitlement.

In June 2011, Matthews resigned from ONC due to alleged problems with the Chief Operating Officer (COO). In August 2011, Matthews began a new job. And in July 2012, ONC was sold without Matthews receiving a share in the payout from the Realization Event.

Because of this, Matthews filed a constructive dismissal claim against ONC and sought damages for loss of the LTIP payout.

Decisions of the Trial Court & Court of Appeal

However, this decision was brought before the Court of Appeal which accepted the constructive dismissal and termination notice period decisions, but overruled the damages awarded Matthews under the LTIP.

Decision of the Supreme Court of Canada

The case was then brought before the SCC to decide:

The final decision of the SCC was to restore the trial court decision that concluded Matthews was entitled to damages that included the LTIP bonus.

What the Case Means for Employment Termination in Canada

The SCC stated that, in cases like this, courts should first make a decision about reasonable notice before analyzing contract terms.

In the case of Matthews v. ONC, the court should have first determined:

If the Realization Event occurred during the reasonable notice period, it would be determined that, if Matthews had not been constructively dismissed, he would have received his LTIP entitlement.

The SCC also emphasized that the language of the LTIP did not free the ONC from obligation to provide reasonable notice even though the wording included “termination with or without cause”. So regardless of how an employee was terminated, the reasonable notice period would still apply to the employee’s entitlement to compensation.

It was also clarified that severance pay is a legal concept meant to compensate employees for “their years of service and investment in the employer’s business and for the special losses they suffer when their employment terminates.” Similarly, damages in lieu of reasonable notice are meant to protect employees by giving them an opportunity to seek alternative employment.

Because Matthews would have been considered a full-time employee on the date of the Realization Event if he had been given reasonable notice, the damages awarded him reflect the lost opportunity.

Two more points the SCC indicated as important to consider:

2. Duty to Exercise Good Faith in the Manner of Dismissal

The SCC also explained that, beyond the duty to provide reasonable notice, employers have a duty to exercise good faith in the manner of dismissal. This means employers are obligated to treat employees with honesty and dignity in the matter of their dismissal as well as the period leading up to the moment of termination.

Employers with existing employment contracts should have those contracts reviewed by employment lawyers to ensure language about entitlement or damages is clear with regard to reasonable notice and to ensure they are compatible with current minimum employment standards.

Employees who believe they have been wrongfully terminated or did not receive the compensation they were entitled to are encouraged to seek the advice of legal counsel. 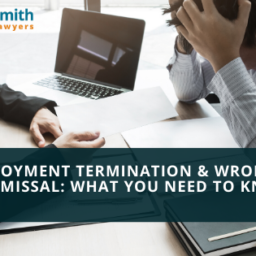 Employment Termination & Wrongful Dismissal: What You Need to Know

Employment Termination and Wrongful Dismissal: What You Need to Know Getting fired is always stressful but especially when you’ve done…